“Make THIS Year Your Best Year Ever!” You’ve seen it, right? This time of year it seems every blogger and every expert/guru/whatever is touting their latest programs to help you make this year your best year ever, the bestest, most incredible, most amazing, best year ever. The year in which you will achieve all your goals and magical unicorns will wake you each morning, standing over your bed, drooling sparkles on your face. 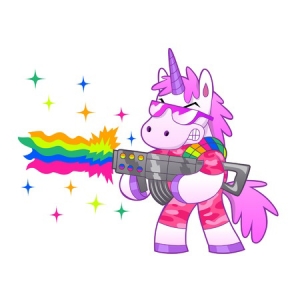 Yep. This guy. He wants to drool sparkles on your face every morning. You can tell. And he’s aggressive about it.

Today I’m going to tell you why you should avoid all of this talk and stop trying to make every year your best year ever.

But…but how can you say I shouldn’t try to make this my best year ever?

See, if you’re not stressfully obsessed about making this your best year ever, you might actually get to relax a little bit and enjoy the moment.

So much striving, so little appreciation and gratitude

When your attention is on creating the “best year ever,” you neglect to focus on the great things that you’ve already done. I’m certainly not suggesting rest on your laurels, but a little congratulatory pat on the back is not a bad thing.

When you focus on making this your best year ever, you presume that you haven’t had many great years already. What’s so bad about the last year that you have to make this year so much better?

Enough with the pressure, already!

Why does this year have to be the best year ever, anyway? Why can’t it just be a really good year? We put so much pressure on ourselves to achieve goals – meet objectives to make this the best thing ever! But as we do that, we put an inordinate amount of pressure on ourselves, and we frankly forget to be happy. Instead, focus on making this year a really good year, instead of worrying about whether or not it’s the best year ever. I promise you’ll be a lot happier.

Every day doesn’t have to be fully magical, and that’s okay.

It’s important to be realistic. The personal development/self-help movement has led people to believe that every moment of your life (and your business) should be magical. You should love everything you do! they proclaim.

Yet in reality, some days, we have to do boring tasks. Some days I have to go to the grocery. Is going to the grocery today going to make my day the best day ever? No, probably not. And here’s the thing: the idea that I should love every minute suggests that I’m either doing something wrong to not love spending time running errands or that my life is somehow broken. It isn’t. Every moment doesn’t have to be magical. Some days are just days. Some days are bad day. It’s not a bad thing. That’s life.

Focus on the day or the week, not the entire year

As a coach, I regularly encourage my clients to break big, unmanageable goals into reasonable chunks. Instead of focusing on making this year an amazing year, which can be a daunting and overwhelming goal, why not focus on making today a great day or on making this a fantastic week? Why not wake each morning with the question, “How can I make today awesome?”

So do we just not set goals at all?

I absolutely believe in setting goals. When we don’t set goals, we become aimless in our path, and we don’t make progress- toward anything. However, if we set goals and create plans to get to those goals, then we are much more likely to make forward progress.

But in the span of a year, much can change that can force even the best-laid plans off course. Further, when we set overly ambitious goals that aren’t just a stretch, but are actually completely unrealistic, if we don’t meet those goals, we begin to get discouraged and depressed and think something is wrong. So rather than setting big, unmanageable goals for the entire year, I believe in setting benchmarks, as in “By the end of the year I would like to put a stake in the ground and say this is where I’d like to be, and I’m going to do my very best to get there.”

So, yes, I believe in setting goals for a full year, albeit slightly vague ones for the long term, and creating more specific goals for each quarter and for each month. And it makes sense to establish clear tasks that will lead you to your larger picture goals, with a reasonable non-perfectionist approach that takes a lot of pressure off.

My plan for the new year

In the past I have felt daunted by trying to make a year the best year ever. In 2008 I married the man of my dreams. That was one of my best years ever. In another year I broke a Guinness World Record, and in another year my book was published. Trying to top those things every single year becomes quite a challenge. So instead of worrying about whether or not I’m making this year a bigger, better year than ever before, I will be focusing on making it a really pleasant, fun-filled, content, peaceful year. I have goals for this year, as I should, and I plan to achieve those goals. But whether or not this year is the best year ever, I don’t really care…and I think you shouldn’t worry about that, either.