“What Does It Feel Like To Break A World Record?”

“What Does It Feel Like To Break A World Record?”

Ever since my “Break A Record With Susan” event, in which I broke the world record for the longest live uninterrupted webcast, people have been asking me, “So, what does it feel like to break a world record?” 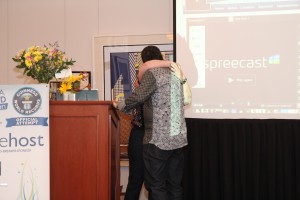 I had a hard time answering this question at first. There were so many pieces to this puzzle, so many moving parts in this event that actually breaking the record was…unlikely. So many things could’ve gone wrong. And even though I took precautions and had a truckload of risk management strategies in place, I was pretty sure that with the odds being decidedly not in my favor, I wasn’t breaking that record.

I was so sure it wasn’t going to happen, though, that the fact that it did happen didn’t really sink in until a few days later. I was driving in the car with my husband, Leo, and I suddenly said, “Hey, I totally just broke a world record.”

That’s when I realized that, even though I took a full three days off after the event, I still hadn’t really embraced what had happened, what I had accomplished. So I said, “Let’s break this down. What does this actually mean?”

What does it mean to break a world record?

Together, Leo and I went through all that I had done: applying to Guinness World Records™, finding a venue that would let me host an event for 36 hours straight and with an uncertain number of attendees coming in and out, procuring sponsors and witnesses, choosing an event planner, hiring a videographer document the event properly, choosing an A/V company that could work with the weird online/in-person event logistics, coordinating 35 speakers from all around the world, organizing the overall event logistics, planning the schedule, training the presenters on the webcasting technology, making sure everybody showed up on time and was where they were supposed to be, emceeing the event, presenting two speeches, conducting seven interviews, one hour of business makeovers, and two Q&As, not to mention marketing the event both online and in Indianapolis…it was, in short, a lot to accomplish in a month and a half. And that’s all before I even completed the official claim form and sent it in with all the documentation and evidence, which I have to say, took quite a bit of time to assemble and make sure I wasn’t missing anything.

But what’s at the heart of breaking a world record?

When Leo and I broke it all down, when we got to the heart of it all, what really sunk in for me was this: I did something that no one has ever done in the documented history of…well, Earth. I did one thing better and bigger and longer than any other human being on the planet has ever done. And that is when it started to sink in.

So, how does breaking a world record feel?

I literally can’t even describe it, other than to say that it’s a bit overwhelming and it also feels both very, very big and very, very small at the same time.

However…whatever happens with the official decision, the one thing I know is that it’s not the bigness of what happened during that event that impresses me. What impresses me, what touches me, is both the generosity of each of the presenters who spoke at the event and the supportive, encouraging, community spirit that emerged during the course of the event. It was the lively chat going on in the webcast chat room, the jokes and camaraderie that we were all in this thing together.

And, it’s that, at the end of the day, as one reporter who came to the event remarked to me, “If you saw just a small fraction of these speakers, it would be like taking a college course in business and marketing.”

Has this ever happened before?

There have been many live events. Many webcasts, too. But has there ever been an event where so many speakers came together to deliver content-rich presentations without really selling or pitching? I can’t think of one.

So there are two things that strike me about this event: first that there was this tribe-building element that created a life of its own, and second that the quality of the presentations was so incredibly high. That is what blows my mind and fills me with gratitude.

It’s cool that I broke a record (though again, the official word from Guinness World Records™ is yet to arrive, as I’m only just sending in the official claim form this week). But it’s cooler that I touched people’s lives.

As for that question…

So as for the question, “What does it feel like to break a world record?” It’s cool. It’s amazing. It’s definitely the biggest thing I’ve done so far. And I’m proud of it.

But I’m way, way more proud of having made a difference. And that’s what I’ll be focusing on for the long haul.