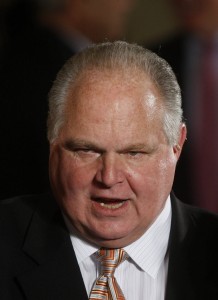 The Limbaugh Lesson: A Branding Misstep? (and my dirty little secret)

If you’ve been following the news, you know that last week, Rush Limbaugh spent the better part of his show for three days straight attacking Sandra Fluke, the Georgetown law student who was barred from testifying at a controversial Republican hearing on contraception recently. The insults Mr. Limbaugh leveled against Ms. Fluke were so intense that they caused an uproar among women from both sides of the aisle and have ultimately resulted in over thirty-five advertisers (and counting) pulling their advertisements from the Limbaugh show and at least two radio stations dumping Limbaugh programming altogether.

As you know, I find politics (and the media sideshow on both sides of the aisle) endlessly fascinating. This week, as I’ve followed the coverage of the widespread outrage over Rush Limbaugh’s comments, I’ve found myself thinking about Mr. Limbaugh and his brand.

You see, I have a dirty little secret, one I’ve kept mostly hidden for the better part of almost 25 years, and one I’m prepared to confess here and now. My dirty little secret, ladies and gentlemen, is that I love talk radio. I absolutely, hands-down, love, love, lurve talk radio like you can’t even imagine, and I always have, since I first started driving. I’ve listened to NPR since I was four or five years old, and have listened to most of the well-known, longstanding talk radio shows like All Things Considered, Car Talk, Dr. Laura, Morning Edition, Fresh Air, Wait Wait Don’t Tell Me, Paul Harvey, Grammar Rules, and yes, even, on occasion, Rush. I listened to all of them off and on from the moment I was old enough to drive alone and choose the own radio stations. Oh, sure, I popped my fair share of cassettes in the player back in the 80s, and I’ve been known to sing (loudly) in my car when I’ve got the iPod, but my first love when driving has always been talk radio.

So I think I speak with at least some measure of authority when I say that it was absolutely no surprise to me when the full weight of Rush Limbaugh’s vehemence and ferocity came down squarely upon Sandra Fluke’s shoulders. I’ve heard Rush rail against strong women for years, using intense language and offensive terms. Rush Limbaugh attacking a left-leaning woman who dares to stand up to the right is pretty much par for the course. For a time, one could take a bit of comfort in the fact that Rush himself said that he was merely an entertainer whose opinion should really not be taken seriously. But he wrote that in one of his books, long before he became known as a power broker in the Republican party.

As I said, this latest incident didn’t really surprise me that much, but the strong reaction to it has raised my eyebrows a bit.

Don’t get me wrong. As a feminist, I have always believed Rush Limbaugh to be pretty misogynistic. But I knew that it was part of his brand, one that included irreverence and disrespect for one side of the political arena. But the problem with creating a brand that’s built on irreverence and disrespect is that, even if your advertisers sign on knowing that this is your brand, even if your advertisers understand your brand and are prepared to handle it (even support it) in the abstract, if you go too far and anger too many, then your advertisers may not be prepared to stand with you.

Rush Limbaugh is a talk show host who talks about politics and this is an election year. All stories relating to politics are hot right now. And the cultural context in which his insults were made is a context in which women have begun to feel attacked anyway. Case in point, the reaction to the comments of Foster Friess, financial backer for the Rick Santorum campaign (for the “how” of that, see this post).

When your brand is already controversial, if you make a misstep and go too far with the controversy in an already-sensitive cultural climate, whether that “misstep” is intentional or accidental, you can pretty much expect that the misstep will become a major incident. In this context, at this particularly sensitive time in American politics, I find it hard to believe that Rush Limbaugh, who has created such a strong personal brand that he is indeed considered by many to be the voice of American Republicans (just google “Rush Limbaugh voice of Republicans” and you’ll see over 25 pages of results referring to exactly that), would make such an egregious error. I have to wonder if this was something more deliberate. Did Rush Limbaugh really make a mistake or was this intentional? Was this an attempt to bring publicity to his show, or did he simply go too far?

Bottom line, if your brand is controversial, it’s absolutely critical that you’re informed and well-aware of the cultural context in which your brand lives. When you develop a pugnacious, contentious brand you can (and should) push the boundaries, but if you push those boundaries too far outside the tide of public sentiment, you may find yourself in a war that could ultimately cost you your business.