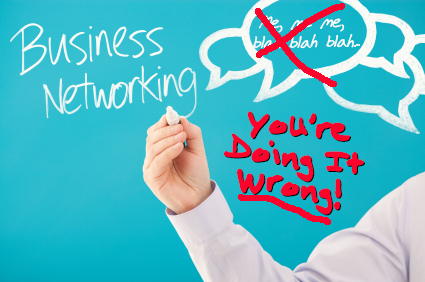 Most of my client work, even with my corporate clients, happens on the phone. I rarely go out for work—for my personal life, sure, but not for work— and I can’t remember the last time I went to a business networking event. Why? Three reasons: 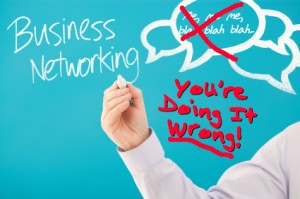 You, there. Yes, you. You’re probably doing your business networking wrong.

Warning Sign #1: When you go to networking events, you run out of business cards.

Big warning sign. If you run out of business cards, that means you probably spent the entire time handing them out. Guess what? You just contributed to several recycling bins. Most people come home from networking events and can’t remember why they have all the business cards they have, so they throw them away. And if you’re giving out so many cards that you run out, you probably didn’t spend much time talking to anyone, and that tells me that you’ve been networking all wrong.

When you network, take your time. You don’t have to give cards to everyone you meet. Networking isn’t a race and you don’t win by running out of cards. You win by slowing down, taking your time, and only giving out your card when the time is right.

Warning Sign #2: You think of business networking as “networking.”

If you think of networking as “networking,” then you’re probably spending every networking moment in “business mode.” That means you’re looking at everyone as a “prospect” or a “lead,” and you’ve forgotten the most important thing: these are people. All the people in the room with you at that networking event? Yeah, they’re people. Human beings. With lives and problems and families and hobbies and interesting stories to tell. Instead of thinking of networking as “networking,” think of it as a giant opportunity to meet people and to get to know them. Relax. You don’t have to be so serious and you don’t have to impress. Just be yourself and remember that you’re just like all those other people in the room.

This is a big warning sign. Talk about yourself a lot, do you? B-o-o-o-ring. And also, gross. Because if you focus on trying to impress me, you’ll likely show me how unimpressive you are. The people who have the most going on have the least need to impress others. Instead, you’ll find us listening more than talking. Know what happens when you listen? You learn. You learn a lot about the person standing in front of you. You learn what makes them tick, you learn what they fear, you learn how their business is doing, how their family is doing…you learn who they are.

If you find yourself back at home after a networking event, looking at a stack of business cards that you’ve collected and you can’t remember what a single person looked like, this is your warning sign. You talked too much and listened too little. Next time, try keeping your trap shut for awhile and see what happens. 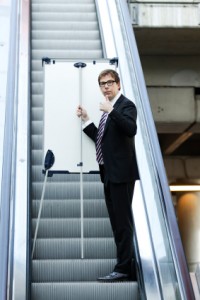 You might think that the reason people don’t remember you after a business networking event is that your “elevator pitch” wasn’t good enough. Okay, first of all, elevator pitch? Seriously? What is this, 1983? Are you hoping to do a sneak attach on a venture capitalist in an actual elevator?

Oh, no. You didn’t. You didn’t really do that, did you? You added people to your mailing list after a networking event? May God have mercy on your soul, because I sure won’t.

I was recently at a speaking engagement where a woman came up to me afterward, complimented me on the talk and said she agreed with me about how people network wrong. She asked for my card so she could invite me to speak for her group…and then a couple of days later I started to receive her newsletter, sometimes to the tune of four newsletters in a single day. Wrong, wrong, wrong, wrong, WRONG.

If you’ve ever gone home from a networking event and added the people you met to your mailing list and started sending them emails, boy, oh, boy, did you go wrong. In fact, go directly to jail. Right now. 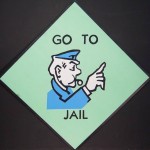 Go to jail. Now. What you did was horrible. Shame on you.

You know what’s better? Sending a nice, individual, personalized email (or better, handwritten note) to each person that you met. Think that takes too much time? Well, think about it this way: you’d have a lot more time to spare if you weren’t wasting so much time networking wrong and getting no results from it in the first place. 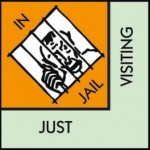 Incidentally, was I the only person who found the Monopoly jail guy super-creepy? Well, if you’re adding people to your mailing list without permission, you’re that creepy!!! Cut it out!

“I’d love to schedule a time for us to talk synergy,” is a frequently-used line in emails I receive from novice networkers. Talk synergy? What the heck does that even mean? Well, most of the time it means, “I’d love to schedule a time for me to talk to you about how you can hire/promote/buy from me.” I have yet to have a single one of these “synergy” conversations that makes any sense or has any clear agenda. Usually it’s “Here’s what I do. What do you do?” and then if it doesn’t turn into a sales conversation for them, it becomes very uncomfortable and “Now what?”

Stop asking people to “talk synergy” with you. Instead, ask for what you really want. Some of the best (and most productive and honest) conversations I’ve had involved just talking to someone for a half hour or so to get to know them better. I don’t often have time to do that, but when I do, I’ve discovered more “synergy” than I’ve ever found in those “let’s talk synergy” conversations. 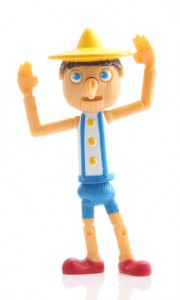 Did you really see me at a local networking event? I’ll bet you caught a fish THIS BIG, too.

Oh, dear reader, please, please don’t lie. I can’t tell you how many times I get emails from people who say, “I’ve seen you at a few local networking events.” No, you haven’t. Want to know how I know? Because I don’t go to local networking events. It would’ve been a pretty serious miracle for you to have seen me at not one, but a few.

Never lie, when you want to network with someone. The inestimable Bob Burg once said, “People do business with people they know, like, and trust.” Not only will I not trust you if you lie, I also won’t like you. And I won’t want to know you. So please, be honest. Authenticity rules when you’re networking.

Bonus Warning Sign: You have time to meet over coffee.

In my experience, meetings over coffee take way too much time. It takes time to get to the coffee place, then you have to order and awkwardly wait for the coffee to be made, and then you sit down and by the time you finally start talking, it’s already taken at least a half hour to forty-five minutes out of your schedule, and that doesn’t even include the drive home afterwards. Do you have any idea what I can accomplish in a half hour?

I would much rather maximize my time by meeting with you via the phone instead.

And for those of you who say there’s something important about meeting people face-to-face, I’ll tell you that I have built many of my most successful, productive, creative, and profitable relationships with people I have never met, or whom I have only met after a year or two of knowing them, simply because we were not in the same geographic place at the same time so as to facilitate a meeting.

Truth: Networking is simple, if you relax, slow it down, and remember that we’re all human beings.

Networking is the art of getting to know other people and building relationships with them. And if you relax and act like yourself, instead of like a hardcore salesman from the 1980s, you’ll do a lot better building those relationships. Likewise, if you remember that relationship-building takes time and rarely happens instantaneously (unless you’re five—remember when you used to be able to say, “Want to be best friends?” and you just were?), then you can relax and know that wherever a relationship’s going to go, it might not go there today. That takes a lot of pressure off. And finally, if you remember that we’re all human beings, multi-faceted and flawed, and extremely, extremely interesting, you’ll find networking a lot more fun, too. You’ll ask more questions than just, “So, what do you do?” and you’ll become far more engaged with the people you’re talking to. Try it and see.